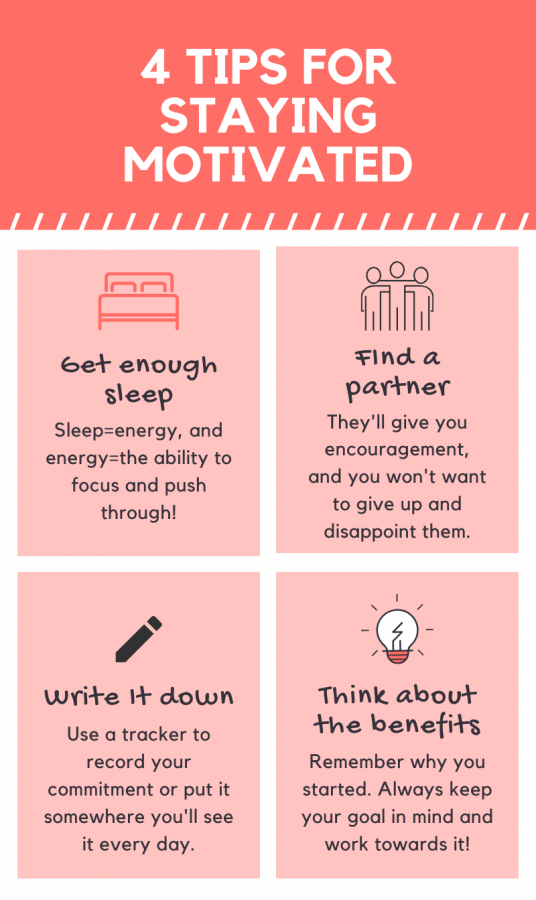 Brightly colored fireworks explode in the sky while the chatter of excited people rings in the background. A fresh, hopeful feeling fills the air and seems to sink into you. “The new year has begun! It’s time for a better me,” many think.

Most people start resolutions because they want to better themselves and begin the year with a clean slate, which often means giving themselves a lofty goal. For example, you tell yourself that you’re going to get super fit this year. That’s also pretty vague, right? Congratulations! You’ve just given yourself a massive task without knowing how you’re even going to do it. The first few days you feel so ready to get in the gym and crush it. But by the second week, you’re just so tired and you can’t bring yourself to get out of bed and drive to the gym. You tell yourself you’ll do it tomorrow. Shocker—you don’t. You’re so far from your goal and feel lost… and now you’ve messed up already. Your motivation goes down the drain along with your resolution.

Research from Strava, the social network for athletes, shows that the average day people give up on their resolutions is January 12th, which isn’t even two weeks into the year! Many people are left feeling defeated and wondering why they can’t keep up with their goals.

“Many people” is also me. The struggle is real. But why exactly do we get stuck in this hole, and how can we avoid falling into it in the first place?

As a regular gym-goer, math teacher Ari Greenberg knows how to have consistent motivation. “Don’t try to achieve too much all at once because it gets overwhelming,” Greenberg said. “Just try to do one thing at a time.” Setting small, measurable goals for yourself along the way can help you achieve something almost every day. Keep that motivation going!

The second culprit is feeling lazy. This is something I experience all the time with gymnastics! All I want to do after a draining day of school is pass out or just sit in my room doing absolutely nothing. Even though you may be exhausted, the best thing to do in this situation is to get up and do it anyway.

“For me, the hardest part is getting out the door on a day that I’m really tired. And once I get there and get my workout started, then it usually ends up being a better workout than I expected,” Greenberg said. I completely agree! On days that I really don’t feel like going to practice, I just get up and go anyway, and I usually feel so much better after practice.

Make it a habit

The last key to keeping your resolutions is creating habits! According to psychology researcher Phillippa Lally from University College London, it takes us an average of 66 days to form a habit.

In my experience, it starts to get easier even sooner. After a few weeks of consistently sticking to my goals, I feel slightly more motivated to keep going. By two months, it starts to become a part of my daily routine that’s easy to follow. The trick is to not give up if you mess up once! You can pick your resolution right back up at any time, even if you’ve been ignoring it for a while. Just keep going, and you’ll be reaching your goals in no time!