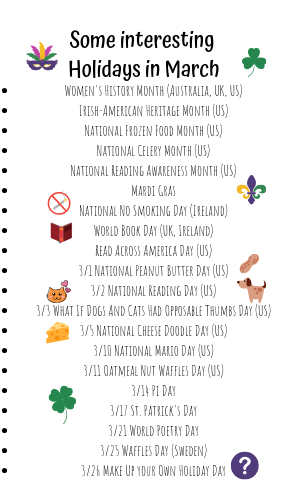 Here is a list of some little-known holidays in March.

March, the beginning of spring. Everyone may say that March is long and uneventful, but within this stressful, break-free, month that has the SAT as its main scholastic feature, there some interesting holidays and history within it. Here are some interesting facts about March that you might not have known.

March is the 3rd month in the Gregorian and Julian calendars. It is one of 7 months in the year to have 31 days. The beginning of spring occurs in the Northern Hemisphere in March while autumn starts in the Southern Hemisphere. The spring equinox will occur on the 20th this year.

The name March derives from Martius, the first month in the Roman calendar. It is named after the Roman god of war, Mars. The month was dedicated to honoring Mars and many festivals were held in his honor. Martius was the “month of war”. Other festivals were mirrored in October. Many cultures celebrate the new year in March.

Some other names for March are Maaliskuu or Maallinen Kuu, which is Finnish for how earth becomes visible from snowmelt. In Ukrainian, the name translates to “birch tree”. Some historical names are Lentmonat which is Saxon and is named after the lengthening of days and the spring equinox. Lent was eventually named after this. Some other Saxon names are Rhed-Monat or Hreth-Monath which are named after the goddess Rhedam/Hreth. An Anglo name is Hlyd-Monath. The Slovenes call March “the month of birches”.

Some symbols of March are the daffodil, which is the birth flower and the aquamarine and bloodstone, which are the birthstones. The Zodiac signs are Pisces (1st-20th) and Aries (21st-31st).